For this article, we have a special purpose; to bring awareness to a fantastic non-profit organization called Extra Life, whose goal is to raise donations for the Children’s Miracle Network Hospitals, which gives much needed funding to families who need it. (Donation links at the bottom of the page!)

Today, the topic is video games; which is the main focus of Extra Life’s audience. To bring some psychological expertise, and applied behavior analytic focus to this topic, we had two volunteers come up to test their mettle on (arguably) one of the most difficult video games to master and beat: “I Wanna Be The Boshy”. On the surface, a very simple looking game. Move a character with a keyboard or analog stick, along treacherous environments without touching obstacles, enemies, or projectiles. That is, until you realize how impressive the reaction time needs to be in order to progress through the levels; upwards of 2-5 responses per second. Each mistake, has a punishing restart to the beginning of the level or section, relying on the player’s skill to not only learn the pattern of motor responses to complete each section, but enter them reliably with perfect timing and order. 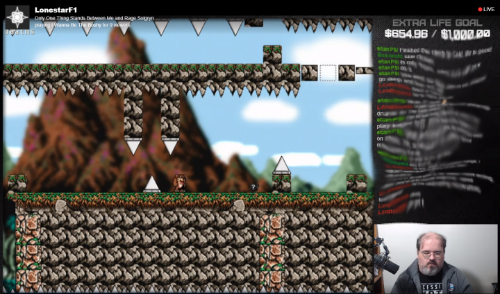 I WANNA BE THE BOSHY!

In many cases, this game requires months to beat (rare cases excluded). With this time frame, we were able to watch recordings of our two players (etanPSI & LonestarF1) via a streaming service named Twitch, which provided the video of game-play that could be reliably studied and analyzed for the target behavior skills necessary to master and beat this game.

If we want to understand the game from a behavior analytic, and psychological point of view, we need to discuss some terms:

Reinforcement: Think of reinforcement as a rewarding stimuli, that has the benefit of increasing the target behavior in the future. A reward which is successful in making a response (game playing, etc) happen more often, is called a reinforcer.

Responses: This is what the person does. Any behavior that follows a specific target stimulus, is considered a response.

Punishment: These are the opposites of reinforcement. They are consequences that decrease the likelihood of a behavior of occurring in the future.

Frequency (and Rate): Frequency and rate respond to behavior that occurs over a set amount of time. For example, if our general target is 43 correct responses in 1 minute of time, then we would want our rate of successive correct responses to near that amount to give us the greatest chance of success.

Discrete Trials: A discrete trial is often used in a clinical condition where a discriminative stimulus (SD) precedes a response, which is then reinforced when that response is the target behavior. The good thing about video games, is that each level, or screen, can be considered a discrete trial; as correct responses are reinforced with continuing the game, while failures (and punishing stimuli) cause it to be repeated.

Massed Trials: Massed trials refers to the use of discrete trials in close proximity after each other, so that no interrupting behavior occurs between them. In other words, repetition. For our gaming example, this would be restarting immediately after each failure to continue to the original starting point of the previously failed trial.

Spaced Trials: Spaced trials refer to a training condition where each discrete trial is separated by a pause, where various behaviors and stimuli unrelated to the next discrete trial may be engaged with. Think of this like a break condition. The player can take a breather, talk to the fans, take a drink of water. All of these things occur between trials, so that there is a gap between them.

Our friendly experiment required our players, etanPSI and LonestarF1 to attempt to engage in 30 trials in both conditions. The first condition would be Massed Trial, which involved 30 complete repeats without any interruption between trials. Successes could continue on to the next section, but repeats would require the trial to begin again without any (controllable) pause or break. The second condition would be Spaced Trials, where our players would be required to take at least a few seconds between trials, to chat, breathe, take a drink of water, or any other free-operant behavior in that gap. We did not limit our players to a specific time limit on these, but on average, they ranged between 10-30 seconds. We would then compare the two to see which appeared to give the players the best improvement benefit.

Our players reported themselves to be motivated to beat the game, and the challenge of proceeding through the game served as conditioned reinforcers. This free-operant preference assessment appeared to have some validity, as these players put themselves through over 60-270 trials per recorded play period, well above our 30 (60 with both conditions) trial requirement for the experiment. The players were free to agree to the conditions of the experiment, or deny them as they felt appropriate. Tracked periods that did not meet the criterion for the experiment were discarded, and the next session which did was counted. We called it “Science Mode”, when the players were agreeing to the experiment terms. Over all, 80% of Massed Trials tracked fit the experimental criterion, and 62% of Spaced Trials tracked fit the criterion. This provided us with a breadth of data to work with in getting a general idea of the factors which may be in play which attribute to their specific learning styles and abilities in completing the game itself. By the end of the tracked periods, both players had successfully completed the game, and beaten the final boss.

During this period, both players went through high rates of failure conditions, where successive conditions of failure within 10 responses were common when they impacted enemy projectiles, environmental hazards, or incorrect landings. This was a common function of the game’s difficulty, which had a degree of punishment effect on responding. In more cases than not, these conditions did not cause either etanPSI or LonestarFI to quit the game completely, but instead lead to a naturally chosen pause between situations to either breathe, react with a verbalization, or take a moment to process. In the conditions where Massed Trials were being tracked, these series of 30 responses were discarded, but when Spaced Trials were being tracked, these series were kept if they held to the same spaced pattern for following responses.

Our target goal for this experiment was to see how they remained within the average number of successive responses (43) per minute, that had been tracked from successful win conditions previously. Our range for their responses were tracked between 20 and 60, on a Standard Celeration Chart. By tracking the average of 30 tracked responses, (some as low as 1, others as high as 77 per minute), we were able to place the average within these intervals on to a chart and compare them to same, or close-proximity day responses from both conditions.

Previous research by Fadler, et al., and others they referenced (Foos, et al (1974), Rea et al, (1987), suggests that Spaced Trial is the superior method of skill acquisition, but it was noticed during etanPSI and LonestarFI‘s play styles that Massed Trials were preferred. Cursory investigations of other players showed the same. Faster restarts appeared to give higher rates of reinforcement, which in turn lead to success within a single day’s time that might not have been possible if play had been delayed or discontinued. It did appear that during this period, higher rates of repetition of these pattern based motor behaviors, did effect the end result of success.

In their article “The acquisition of skilled motor performance: Fast and slow experience-driven changes in primary motor cortex” Karni, et al (1998), suggests that there are different types of learning stages, and that experience driven changes to the brain effect two different types of learners in different ways; “We propose that skilled motor performance is acquired in several stages: “fast” learning, an initial, within-session improvement phase, followed by a period of consolidation of several hours duration, and then “slow” learning, consisting of delayed, incremental gains in performance emerging after continued practice. This time course may reflect basic mechanisms of neuronal plasticity in the adult brain that subserve the acquisition and retention of many different skills.” which they demonstrated in their study as well. We will not go too deeply in to biological factors in this article (since we did no MRI’s on our players), but if you have interest the article is cited below. However, this “fast learning” does appear to coincide with our conceptual Massed Trial format of learning, and the within-session improvement phase may be a factor in what we are seeing in the results of etanPSI and LonestarF1. 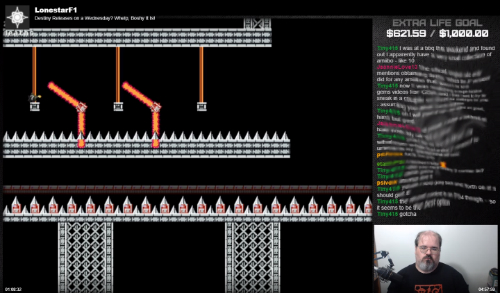 The results from our experiment was astounding. We found a clear favor in both the player’s preferred style of trial, and the ability for their skills to improve with it. Both players ranged in similar failure (0-1) and win (~43) successful responses per minute, and both in cases leading to successes against particularly difficult bosses exceeded these by going over 70 successive correct responses per minute!

With etanPSI we were also able to see some situations where both spaced and massed trials, interspersed, had a greater degree of success than when they were split by 30 consecutive trials each. When he was able to engage in repetitive environment/platform based difficulties, Massed Trial was more successful, but when dealing with alternating projectile challenges from game bosses, Spaced Trials were useful to mitigate the punishing effects of failure conditions. Higher volume vocalizations, high intensity percussive maintenance to gaming instruments, and broader vocabulary, appeared to lend a restorative effect to attentiveness and responding rates to the following massed trial conditions.

A Dpmin-11EC Standard Celeration Chart from our experiment.

In both conditions, we were able to see consistent Acceleration of gained successive correct responses per minute, from Massed Trials, which may have also been in part to the increase in difficulty as the players progressed, requiring higher outputs of responses. Nevertheless, the players did rise to the occasion and appear to hold to improvement in responding and pattern recognition & responding, over the course of 30+ trials per day. Where many had failed and given up, these two players had not only succeeded, but excelled at an incredibly difficult game.

Now that you know the story of our fun experiment, here’s where you can donate and thank our amazing players for their time and skill, as well as help the lives of countless children receiving medical services through a hospital on the Children’s Miracle Hospital Network! 100% of all donations go directly to charity, and are tax deductible! Help our player’s team to exceed their goal and change lives!

Donate to our amazing experiment volunteers!