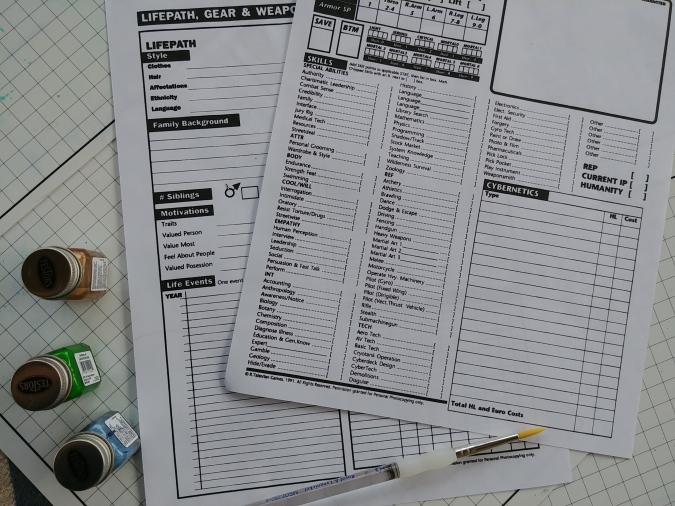 There are a vast array of opinions on role playing games. The stereotypes about them are prevalent in the popular culture of movies and televisions shows- mainly depicting the socially inept cliches rolling dice and spouting an incomprehensible language of their own. That type of depiction does get laughs, but it also is unlike anything I’ve seen in reality. I was influenced by those caricatures of role players too. For a long time I did not understand the appeal of piling up in a dark basement, playing a game about pretend people where nothing really mattered and there were so many rules to learn. Where’s the fun in that? It was the wrong outlook, but the right question. There was fun in it. It just took the experience to actually try it out and find it for myself.

Tabletop Role Playing is just a form of collective story telling. If you’ve ever seen a fictional movie and been engrossed in it, or had an idea for a novel, these are the same types of precursor behaviors to putting yourself in someone else’s shoes. There’s a fun to that. Taking on a different personality for a moment, and seeing a viewpoint unlike our own. If we want to get psychological about it, there might be some aspects of Adlerian play theory, or Bandura’s social learning through vicarious reinforcement in there. The gist of it is; one person sets the stage of the story and determines the rules of how the game is played, and the players take on a role and navigate that world for a collective goal (most of the time).

If you’re the type of person who likes making materials like token boards, graphs, or craft projects- this is right in your wheelhouse too.

It’s best to start off as a player before deciding to run your own game. You get to understand group dynamics and how collective story telling works. I was in my 20s when I first started this type of role playing. I started late. I tried a little of everything I could get invited to. Some people like settings with dragons and elves, but that’s not my type of thing exactly. I gravitated towards more realistic settings where interpersonal relationships and psychology was more grounded in humanity. Fictional worlds not too different or fantastic from our own. What I learned quickly is that these games work on Skinnerian principles- many things do, but role playing had a specific feel of reinforcement schedules that was familiar to me. The person who runs the game, sometimes called a referee, sometimes called a DM, sets the scale of what actions are reinforced and what are not.

Sometimes these are fixed reinforcement schedules based on experience: points that are rewarded that can be applied to the characters skills and attributes to make them more proficient, or more hardy to tackle the adventures. A measure of how much the character grows.

Sometimes these reinforcement schedules are variable ratio items: like in-game money, armor for your character, and tools that they can use to tackle different obstacles. A measure of what the character has, or can spend.

The players themselves run into variability by natural consequence; every action they decide to have their character make, if it is a specific skill or difficulty, comes with rolling a die to see if they succeed or fail.

These can be run like any other Skinner box. Compound schedules appear to be the most interesting to players. A fixed ratio that can be expected- perhaps collecting something important for one of the protagonists in a decided location. Or maybe a variable ratio- deciding what foes give up what item or monetary reward for being bested. Some people run their games with combat in mind; every situation is a nail to be beaten down by a well armed adventurer’s hammer. There’s a thrill to that kind of gameplay, but I find that it isn’t compelling enough for me. I prefer to create stories that have the opportunity for danger, but the risk of engaging in combat is sparsely reinforcing and has a greater opportunity for punishment. A live by the sword, die by the sword style of reinforcement schedule. There may be rewards to a quick and brutal choice, but a player can lose their character just as easily. I like using social stories in therapy to develop more adaptive skills. I use that same mindset when designing a game too- why resort to violence when you can talk your way out of trouble?

Say there is a dark concrete room, dim lights, seven enemies outnumber and surround a poorly armed player group. If they choose combat- they would most likely lose. It might work. I would allow it. Let the dice roll and see if they succeed. But more often than not, a clever player can decide to roll their die in a very different way; persuasion. I set the mark much lower for that if they have the right pitch. They make a deal even the most brutal enemy couldn’t refuse. The die is rolled- they win. Now there is one enemy less, and one more temporary friend to the adventure. The other enemies aren’t just going to stick to their hostility- maybe they overheard that, maybe they’re swayed too, maybe this causes division in the enemy group. The player group capitalizes. They play bluff roles. They play intimidation rolls. They play oratory rolls to back their fellow players up with a rousing speech. The tables turn, and now they’re on the side with higher numbers and that piece of the game is won.

That situation is harder to pull off for players. It takes more thought. More coordination. Turn taking. A minute or two to step away from the game, collect their ideas, then bring it back. I’m not trying to run a stressful table here- thinking is allowed. They devise a plan that works better than pulling a sword and pulling a trigger. I reinforce. Experience for “defeating” an entire room. They did after all. “Tangible reinforcers” in game for the characters. They get a bartered deal that they’d never get anywhere else if they’d been violent to these bad guys. Negative reinforcement- they avoid the aversive harm that is revealed to them when they now know- after persuading their enemies- that the enemies outmatched them in hidden weapons. The players used teamwork, not just some haphazard dice throwing about blood and guts. Group bonus. More experience for everyone. Why not? They played the game their way and they played it smart. These were not just four people sitting around a table doing their own random guesses for a quick and easy win, they came together with ideas that I would never have thought up for the story and won it themselves. They changed the story. Now it’s my turn to adjust my ideas to their new role played reality.

Now…It doesn’t always play out that way. Variable reinforcement is a necessity in a game of rolling dice. So is variable punishment. Sometimes the dice roll, and there’s a failure. Or worse- a critical failure! Not only is the prize not won, or the intended action not completed; it was actually a detriment to even try. Players have crashed a car. Blown up a usually harmless household item. Set a pacifist character in the game into a fit of rage and spoiled a whole quest line. That bank vault actually had a skunk in it. It happens. It’s something like a gamble, but when the reinforcement flows heavier than the punishment, it’s all worth it. It evens out. It takes a strong story, it takes a coherent direction and narrative, but the players do all the heavy lifting. They think. They plan. They roll the dice. Everyone has a great time.

You get to see patterns in that. Make it more challenging the next time. More engaging. Take the next story point in a way that you’d never have thought of before.

Let’s not forget that even when the game is done, there’s a friendship there now. People got to know each other a little better. They got to see people they talk to in a different light, more creative to one another, more inventive. Sometimes some playful rivalries come out of it. There’s also a community out there with shared experiences that goes beyond individual play groups and tables. Thousands of other people playing the same game their way. I personally love the community. I have ideas about how to run the game, and run it by others who play the same game but have done it better than me. I adapt. I improve. Sometimes, I even have an idea about how psychosis works in this imaginary world, and reach out to the internet with an interpretation on new rules-….and the creator of the game itself (Maximum Mike Pondsmith) replies.

Talk about fun. Talk about reinforcement. I’ve learned never to underestimate what a good table top roleplaying game can be, or what it can bring to an otherwise ordinary afternoon. If you’ve never tried one? It’s never too late. Groups are out there with every age, every time commitment, and every skill level. Give it a shot. You might just like it.

Questions? Comments? Likes? Leave them below.